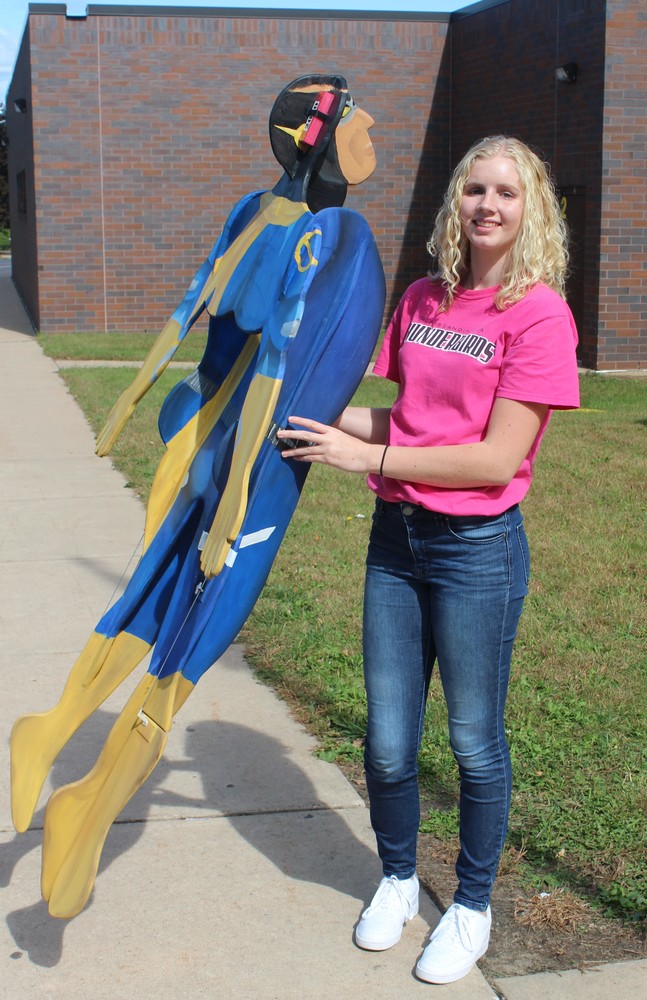 For about the last 20 years, students from Iola-Scandinavia High School have volunteered at the KidVenture Campus during the annual EAA Convention in Oshkosh.  This summer was a bit different with the social distancing requirements imposed by Covid-19.  The I-S student volunteers were splendid as always, with one student exceptional.
As part of the activity the students participate in is building of model aircraft and rockets.  In addition, members of the Northern Aces air show team construct specialty RC aircraft and this year it was an RC version of “Aviore”.   Recently Stan Lee of Marvel Comics and Marvel Studios Superhero movie fame created a new aviation-based superhero for EAA called “Aviore”.  Artistic talent was sorely lacking in the show team, and that is where McKenzie Bonikowske one of the I-SHS volunteers stepped in.  She volunteered to paint the radio control version of “Aviore” and the result was amazing.  When an EAA Director saw the character, the thought immediately was that the EAA Museum will be interested in the RC version for display.  A museum director saw it and passed the suggestion that EAA acquire “Aviore’ on to the museum curator.  The museum was very interested, so the show team decided to donate the current model and will build another for team use at EAA 2022.  The R/C Aviore character was delivered to the EAA Museum to Mr. Ben Page museum Curator.  He stated with a huge smile, his intention to display Aviore near the children’s area in the museum
To my knowledge McKenzie is the only I-S student to have her art work on display at a major world class aviation museum.  Her talent is recognized and appreciated, and shortly to be on display for the world to see.

FYI: Iola Scandinavia High School is the only High School in the United States to have received a EAA Directors Service award.